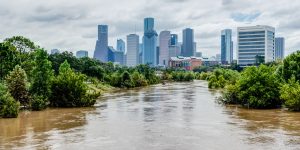 The last few weeks for folks in the Houston area have been a blur. Many people have lost their homes, possessions and some, their lives. The entire community has suffered a multitude of losses, and the grief is apparent – both in the shock of those who directly suffered, and the depression and guilt felt by those who were not directly impacted.

As Houstonians we now have a new way of greeting both friend and stranger: “Did you get any damage from Harvey?” What we learn as a result of those conversations may call us to action or ask us to invest our unique talents in an unexpected way.

Many are facing the question – how can I help? Some are overwhelmed at the scope of the loss and paralyzed with indecision. Others jump in haphazardly doing whatever seems like needs to be done in the moment. How can we take action AND discover meaning in the light of such a vast disaster?

Some believe that every disaster has an inherent positive within it. THIS IS WRONG! Meaning does not lurk inside trauma, rather meaning can be discovered by the response one makes in reaction to trauma. The trauma itself is not meaningful, but it is possible to discover a meaningful response to any trauma.

Meaning ‘lives’ at the intersection of a demand from the world and one’s response to it. The question to ask is: “How can I respond in a way that gives the unique gifts I have to offer, and meets needs that are present? What is needed that I can do – that ONLY I can do?” Here the individual’s uniqueness is important. One person will not, CANNOT, provide the perspective or energy in the same way another person can.

I spent a few days volunteering at the George R. Brown convention center – a temporary shelter for thousands of evacuees. For me it was both rewarding and frustrating. I was able to help a couple, each more than 80 years old find a safe place to sleep for the night. I affirmed that they had been in communication with their children, and that they had enough of their medications for a few days. I felt a connection with them and they told me how humbled they were to escape their home with a few belongings. Though this was a powerful event – when I returned a few days later – I was overwhelmed with not feeling very effective. There were so many volunteers and my particular skills were not needed. I decided not to return to the emergency shelter – but find other ways I could serve.

A colleague told me she felt overwhelmed at the prospect of going to the convention center. However, she found a way to help that suited her unique gifts. She noticed some elderly friends of her family did not have much food, and were too proud to ask for money. She decided to bring them groceries and committed to continue assisting with the cost of food from time to time. This is helpful to the couple in need and meaningful to my colleague.

The recovery from Harvey will be measured in months or even years. There will be plenty to do next week and for many months to come. It is important for each of us to recognize that finding a meaningful response to this disaster will require answering a unique challenge, that only you can answer.