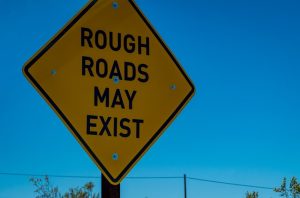 “Rough roads may exist.” I had never seen this sign until recently. The most poetic road sign I have ever seen, it also comes with a concise philosophical warning. I want to hang this sign in my office (and in my consciousness!)

Why do we need a reminder that the path in front of us may be difficult to traverse? It should not come as a surprise, as when we look in the rearview mirror, there were rough roads that we have already traveled. Somehow we want to believe that from here on out, the path will be smooth. And for a time it may be. But as sure as death and taxes, there will be troubles that we will have to face.

Living in Houston where the sandy, shifting soil means that road deterioration and repair are a constant, you might think that we would get used to the bumpy ride. But every mayoral election cycle, the promise of pothole-free roads entices us to vote a particular way. We are voting for a fantasy – for a violation of the laws of physics (and metaphysics). The ever smooth trail does not exist.

Driving on a section of road that has been newly repaired, can lull us by the velvety surface. Sure enough, a few months later (if not weeks), new potholes, shifts in road level, or other abrasions appear.

In life, we cannot predict when the path will roughen. Sometimes when things seem to be going well, an illness, accident, or relationship rupture will spoil the ride we had been enjoying. When the road roughens, we may curse the street (or the mayor, or other people, or God), to no avail.

However, existential shock absorbers do NOT come with a guarantee. Humans are always growing, learning, developing new perspectives and values. What may have been an adequate set of values in one’s teens, no longer works in one’s 30’s. And the value set that was so certain in your 30’s may be long abandoned by your 60’s, etc.

The second answer is in accepting the reality of the rough road. Enjoy a smooth patch if it presents itself, but do not curse the broken pavement. The trail is not you, nor is it your life – it is merely the place you are traveling right now. The road may be uncomfortable, even painful to cross but it is a natural part of the journey.