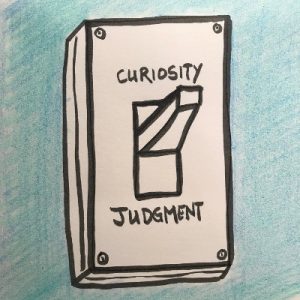 Olivia, our 5-year-old granddaughter, recently arrived at our house and announced loudly – “It stinks in here!” Olivia was noticing the garlic smell from our just cooked meal. Later Kelly, the woman to whom I am married, was talking with Olivia and said – “It did not bother me what you said about our house stinking, but some people might have their feelings hurt if you said something like that”. Kelly went on to explain “You have a pause button that you can push to stop and think about how others will feel about the words you use before you say them.” Olivia responded with enthusiasm – “I didn’t know I had a pause button, which side is it on?”

If we all have a pause button, do we not also have a curiosity switch? Is it possible to move from a consciousness of judgement to an awareness of curiosity. I think it is. And we can use the curiosity switch for ourselves as well as for others.

Instead of the self-judgement “I am so dumb!” I might use self-curiosity “I wonder what motivated me to do that?” Instead of pronouncing a moral verdict on a stranger “That person is driving way too fast and dangerously!” – I might develop a mental inquiry – “I wonder what would prompt that behavior?” or “I wonder what causes that person to feel such a need to hurry?” Judgement is an exclamation point and curiosity is a question mark. Changing the punctuation of a sentence changes its meaning – changing the punctuation of our awareness changes our experience.

Installing the pause button and the curiosity switch is simple – raise awareness of these concepts. However, for them to be useful you will have to practice using them.

Perhaps we can do a simple experiment right now. Remember the last time you felt self-judgement? Take a moment to move to curiosity mode and ask yourself:

What was going on for me?

What did I expect of myself?

What did I feel?

Did this experience remind me of other times in my life? If so what were those
experiences like for me?

Can I just sit with the feelings that come up for me now, and not try to change?

Curiosity does not erase behavior that harmful or even mildly noxious – it simply changes the focus. By focusing on what might prompt behavior it leads us to the possibility of greater compassion. When we are in a judgement consciousness we are not curious but sanctimonious.

Yesterday Olivia she had been upset the night before when her father told her it was time for bed. She said she was crying, but she used her pause button and was able to tell her father she was sad because she wanted to keep playing. Olivia is already gaining mastery of her pause button. I hope I can become as skillful using the curiosity switch.

* in the book Art is a Spiritual Path by Pat B. Allen