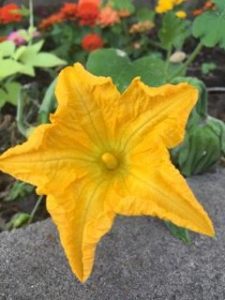 In October 2016, Kelly and I placed several pumpkins in our flower bed as an autumn decoration. Over time the pumpkins started to decay. As we watched the slow decay it looked sort of like blowing up balloons, in slow motion and in reverse. During our very mild Houston Winter – most of the pumpkins were reclaimed by the soil (a few very tough ones are still hanging on!) The pumpkin seeds started sprouting – some as early as January – and have been growing steadily since then. The photo is pumpkin blossom on the vine from that experiment in non action. Taken in early April 2017 .

I am amazed by how growth takes place – naturally, all by itself. We did not “cultivate” or water the pumpkin seeds, we just left the pumpkins alone.

I’m also aware that what is sometimes thought of as “death” may be merely a phase of development. The Autumn pumpkins are no longer in the form they were in October – but their new form is growing and changing. The pumpkin fruit that we placed in the garden in the Fall was no longer growing, but contained the DNA of replication. Sometimes we have to let some part of an experience or a relationship go – to allow for new growth.

This Spring – I will meditate on what I am learning from pumpkins. What can I leave alone to grow on it’s own? How can I be alert to what new forms are growing from what I had thought was just decay? I invite you to join me in these spring time meditations.