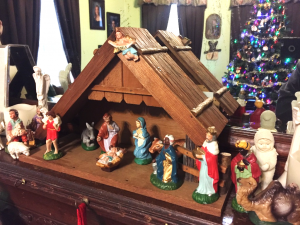 Christmas comfort, to me, is in our family traditions. The old Victorian house which was my mother’s home for 56 years – has 12 foot high ceilings and a large mantle over the fireplace. Each year (for at least the past 55 years) a Nativity Scene was displayed on the mantle and a cedar Christmas tree tall enough to touch the ceiling was in place in front of the middle window. Each year it was a cedar tree, which became increasingly difficult to come by, commercial tree farms stopped supplying live cedars many years ago – so in recent years my brothers who lived in our hometown would scour their own and friends property looking for an appropriate tree, and they always found one – tall enough to touch the ceiling.

As Christmas approached, stockings would be hung. Now it took some doing to hang stockings on the mantle in a family of 14 children! But the older kids would “mature out” of hanging stockings, and the nails which had been removed for safety 11 ½ months a year would be replaced.

Each Christmas morning the living room would be packed with presents under the tree. Imagine a 12-foot high tree with gifts piled three feet tall and five feet deep. On the mantle would be at least seven stockings overflowing with toys and candy. These are cherished childhood memories.

Well, this year was different. My mom died last January (Dad had passed 11 years earlier). So everything that had felt constant was now in question. My sister, Julie still lives in the family house and decided to host a Holiday party on December 15. Most of my family was there.

An artificial tree occupied the space where the live cedar tree usually stood – and it was not tall enough to touch the ceiling. However, it is more sustainable, hypoallergenic and required a lot less work to set-up. The new tree is beautiful with lights and ornaments that have been hung for decades still there. Also, there is now planted outside the house a cedar tree – with solar-powered lights. From inside we can see the living cedar, just outside the living room window.

The gifts under the tree were not as voluminous as in my childhood memory, but still impressive. Each sibling had a large velvet bag – so that searching for gifts for each sibling, their spouse and offspring would be held to a minimum.

On the mantle, the nativity scene was displayed. Over the years one of the shepherds has lost a ceramic leg, and one of the magi has had his staff replaced with a piece of wire, but other than that – the Nativity scene is still there. No stockings this year – I am sure the tired old mantle appreciates a break from all the nail holes!

It was different without Mom and Dad, but they had created traditions that we carried on. The traditions have changed, as life moves on

It is vital for meaningful traditions to continue, while change is inevitable. How can we hold on to the value of the custom while coming to terms with the inevitability of change? For me, it is not that the Nativity Scene itself holds value, nor the tree, stockings, gifts or any of the things that I associate with Christmas – but the material objects represent the warmth of Christmas, the joy of family connections and the reminder that there is solid footing even in a shifting universe.

This Christmas and holiday season: may your traditions – old or new, help you remember to be joyful in times of darkness, hold the mystery of constancy and change, and celebrate being with those you love.